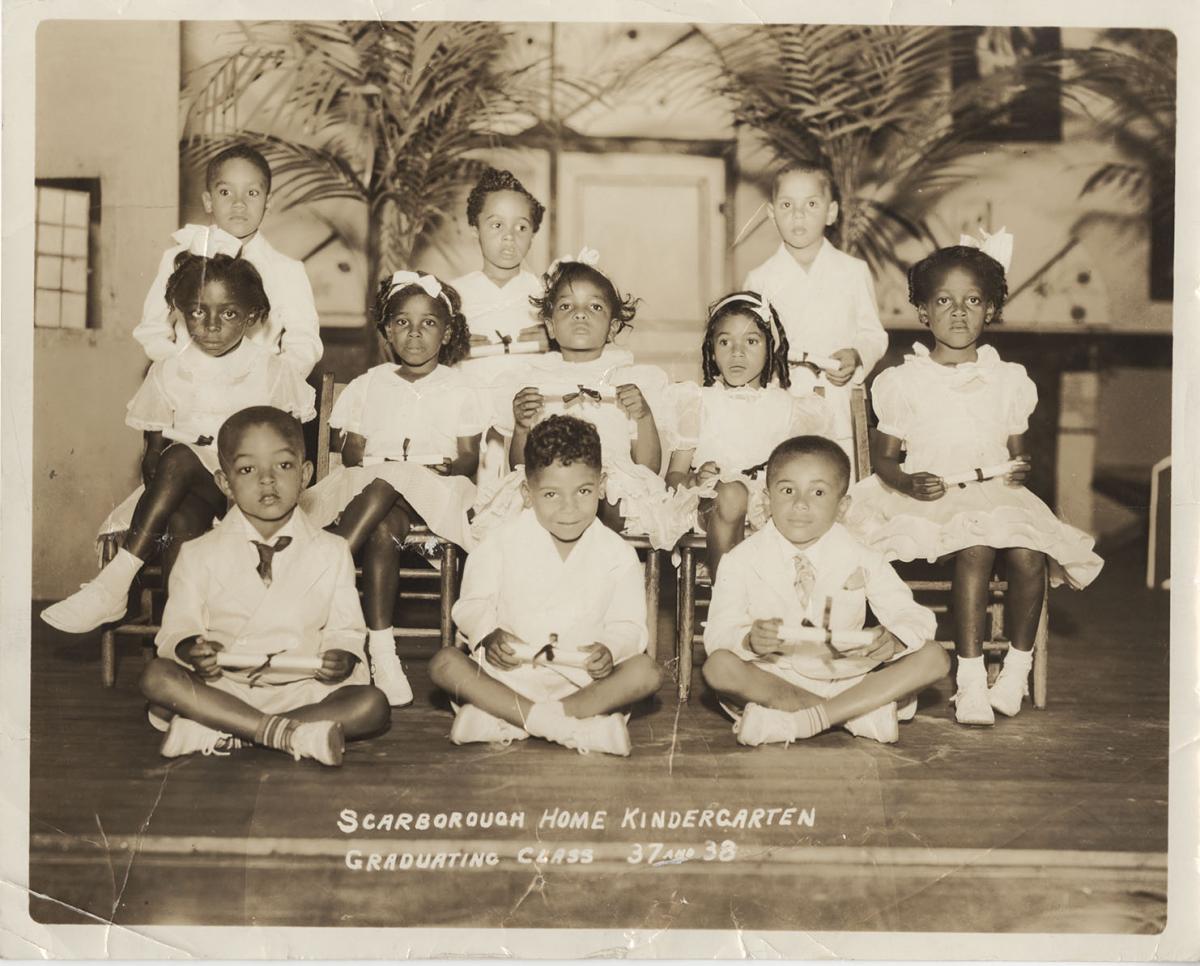 The Franklin Research Center contains many materials pertaining to African American life in Durham, North Carolina. The collections reflect both institutions and individuals, while documenting the unique dynamics of race, gender and class in a New South city. Conerstone collections related to Durham history include the North Carolina Mutual Life Insurance Company Archives, Lincoln Hospital Records and the papers of C.C. Spaulding and Clydie F. Scarborough.

Helen G. Edmonds (1911-1995) was a noted educator, historian and administrator. She was active in numerous civic and social organizations and was a stalwart in the Republican Party. The correspondence, speeches and programs in the collection provide insight into her work as a teacher and scholar. The bulk of the collection, however, documents her work with the National Republican Party, including giving the second nomination of Dwight D. Eisenhower as a candidate for the Presidency and appointments in the Department of State, in the Department of Defense, on the National Advisory Council of the Peace Corps and as a U.S. delegate to the United Nations.

Rencher Nicholas Harris (1900-1965) was an African American businessman and civic leader of Durham, N.C. The Rencher Nicholas Harris Papers span the years from 1851 to 1980, with the bulk dating from 1926 to 1965. The collection consists mainly of materials relating to Harris' work in political and educational affairs in Durham in the 1950s and early 1960s as a member of the Durham City Council and the Durham School Board; his career in banking, insurance, and real estate as an official of the Bankers' Fire Insurance Company; and his civic activities.

Chris D. Howard was a Duke University undergraduate. The collection contains Howard's research material for an honors thesis. The notes concern the early history of Durham and events related to the struggle for racial equality. There are notes and outlines of interviews (cassette tapes and telephone conversations) and a list of persons interviewed by Howard — including Mary Trent Semans, Floyd McKissick and other persons who participated in or witnessed this struggle.

Lincoln Hospital was a Durham hospital established in 1901 by Dr. Aaron Moore, Dr. Stanford Warren and John Merrick to serve African Americans in the area. The Lincoln Hospital Records primarily comprise the institution's administrative and medical files. The collection as a whole documents the bi-racial cooperation that was involved in establishing, running and maintaining the institution and outlines the collaboration between Lincoln Hospital, Watts Hospital and the Duke University School of Medicine.

The Hugh Mangum Photographs collection dates from approximately 1890 to 1922 and contains 689 glass plate negatives of portrait photographs taken by Hugh Mangum as he traveled a rail circuit through North Carolina, Virginia and West Virginia and taken in photography studios he and partners established in Virginia and North Carolina. The images are composed chiefly of individual portraits and group portraits of residents in those areas. The majority are white but there are a substantial number of African American portraits. Please note: The original glass plate negatives are closed to research use. Print and digital images are available for viewing.

Benjamin Muse (1898-1986) was a politician and author, of Reston, Va. The collection includes correspondence, writings, addresses, memoranda, printed material and clippings documenting Muse's career as a soldier and officer in World War I and II, as a Virginia state senator and as director of the Leadership Project of the Southern Regional Council from 1959-1964). The collection includes drafts and research notes for his books Tarheel Tommy Atkins (1963), Ten years of prelude: the story of integration since the Supreme Court's 1954 decision (1964) and The American Negro revolution: from nonviolence to Black Power, 1963-1967 (1968). It also includes memoranda (1959-1964) for the Southern Regional Council on his travels through the South and talks with Southern leaders on race relations.

The papers of Gwendolyn M. Parker, which primarily document her writing career, span the years 1967-1998. The majority of the papers date from 1986-1997. They consist primarily of diaries, correspondence, clippings, writings and other miscellaneous printed and manuscript materials. Parker's writings are well documented by several manuscript versions of her 1994 novel, These Same Long Bones, and her 1997 memoir, Trespassing: My Sojourn in the Halls of Privilege. Parker's correspondence is chiefly professional and related to her efforts to publish her work, but a small amount of personal correspondence is part of the collection.

William Gaston Pearson was a Durham, African American businessman, civic leader, educator and philanthropist. The collection includes a scrapbook of clippings and printed materials that reflect the business accomplishments and life of Pearson, who founded the North Carolina Mutual Life Insurance Co., the Mechanics and Farmers Bank, the Durham Drug Co. and other businesses in Durham, primarily in banking, credit and insurance.

The Sam Reed Papers span the years 1986-2001 and pertain to his political activism in Durham, N.C. The papers highlight the Civil Rights Movement and subsequent race and labor relations issues in the South. The collection consists of the records of the organization and the newsletter, Trumpet of Conscience. Other papers include articles, correspondence, interviews and speeches by and about Reed.

The collection features correspondence, legal and financial papers and photographs that document the personal relationships and professional activities of Fannie B. Rosser, a successful African American businesswoman. The correspondence series pertains to Rosser's business ventures in management of rental property in Lynchburg, Va., and Durham, N.C.; personal loans made to family and friends during the Depression; and investments in government stocks and bonds. Later correspondence centers around her relationships with her foster daughter and her niece. Family photographs date to the 1860s.

Asa T. Spaulding was an activist in civil rights, education and employment and an insurance executive in the North Carolina Mutual Life Insurance Company for almost 35 years. She began as the company's actuary in 1933 and served as its fifth president from 1958-1967. Elna Bridgeforth Spaulding was an activist in civil rights for minorities and women and involved in local politics in Durham, serving as a Durham County Commissioner for five terms from 1974-1984. The Asa and Elna Spaulding Papers document an African American family's lifelong involvement in the business, political, educational, religious and social life of Durham.

Earl E. Thorpe was a clergyman, historian and social activist. Primarily, materials in the collection address Thorpe's work at North Carolina Central University (formerly North Carolina College) and his stints as a visiting professor at Harvard and Duke universities. Thorpe's service as chair of the program committee for the 1979 meeting of the Association for the Study of Afro-American Life and History (ASALH) and his term as president of the ASALH in 1980 are also well represented. The bulk of the collection consists of Thorpe's personal and professional correspondence. Personal correspondence with family and students and material reflective of Thorpe's life in the ministry are scattered throughout.

Spanning the period of 1917 to 2004, the Charles DeWitt Watts Papers contain files related to Watts' education, family and community activities in Durham, N.C., and his career as a surgeon, administrator and trustee on several boards. Watts was a pioneering African American surgeon who served in a number of capacities as a leader in the medical field at Durham's Lincoln Hospital, Duke University, North Carolina Central University and North Carolina Mutual Life Insurance Company.  There is material on the formation in 1901 of Lincoln Hospital, a medical care facility for African Americans in Durham, and other items on the early 20th-century history of Durham. The bulk of the papers relate to the later half of the 20th century. Formats primarily consist of correspondence, reports, notes, speeches, photographs and print materials.

The North Carolina Mutual Life Insurance Company Archives documents the development of the company in Durham, N.C., and contributes to the historic record on African American businesses and entrepreneurship in the South and in the United States. Dating from 1850-2008, with the majority of the items dating from 1898-2008, the material covers nearly every aspect of the company's operations, management and milestones. Documents take the form of corporate office files — including the offices of five company presidents; annual statements; reports; surveys; memos; legal and financial papers; original life insurance policies; training material; programs; ephemera and artifacts; and a large number of historical photographs of staff and their families, offices, buildings and Durham scenes.

Women-in-Action for the Prevention of Violence and Its Causes is a bi-racial community development and charitable organization in Durham. Civic leader Elna B. Spaulding founded the organization after attending a 1968 national conference on "What Women Can Do to End Violence in America." In 1970, Women-in-Action played a prominent role in smoothing the way for court-ordered school desegregation in Durham. The collection is comprised of correspondence, by-laws, meeting agendas and minutes, budgets, articles of incorporation, photographs, videos tapes, certificates and news articles documenting the organization's activities and structure.

Youth Document Durham and Durham Works were programs sponsored by Duke University and the Center for Documentary Studies that brought together young people ages 12–16 from diverse Durham communities to document their lives, local history and contemporary social issues through photography, oral history and narrative writing.