The Catalan Atlas (1375), attributed to Abraham and Jehuda Cresques (b.1325) from Majorca in the Balearic Islands (Spain), is a series of six illustrated vellum panels, covering the heavens and the earth, with explanatory texts in Catalan. The original is held at the Bibliothèque Nationale de France. The Rubenstein Library holds a reproduction created in vellum in 1959.

The Atlas is one of the few surviving examples of fourteenth-century cartography.  It is richly illustrated with figures depicting the famous monarchs of the world, their kingdoms, and their enemies at war. The written sections identify well-known cities, biblical places, exotic animals, and coveted commodities such as gold from Africa, pearls from Persian Gulf, and spices from Asia.

The two first panels discuss astronomy, astrology, and cosmography. Panels 3-6 depict a world map, or mapamundi, stretching from the western coast of Africa to China and from Scandinavia to the sub-Saharan regions in the African continent.  Panels 3-4 (displayed at the Incubator Gallery In-Transit Exhibit at the Nasher Museum) represent Western Europe and North Africa, followed by Eastern Europe, the eastern section of North Africa, and the Middle East.

Panel 5 depicts Central Asia, the territories north of the Caspian Sea, the Persian Gulf, and the Indian subcontinent. The last section is a map of the Far East with China and an imprecise number of the exotic spice islands. This last map shows how the lack of geographical information about China is compensated for by a rich ornamentation that fed the curiosity of fourteenth-century Europeans about the fabulous huge land of Cathay, previously described by Marco Polo.

The Catalan Atlas is meant to be read with north at the top, and with the Far East at the right. The Oriental portion displayed here includes a visual reference to Arabia and the Queen of Shiva, as well as ancient Chinese sailing ships, and the Silk Route. There are numerous allusions to the travel literature of the time, such as Marco Polo’s Travels and The Travels and Voyages of Sir John Mandeville. Here, to the east of the Mediterranean regions, lies a world of spices, silk, and riches that Columbus tried to reach seeking a western route 117 years later.

In Transit: Arts and Migration around Europe is an interdisciplinary humanities project launched by Duke faculty and students from the Departments of Romance Studies, and Art, Art History & Visual Studies, in collaboration with the Nasher Museum.

In Transit is a learning community linking courses and seminars, guest speakers, and art practice. It offers pathways across a multisite art installation at the Nasher Museum, the Rubenstein Arts Center, John Hope Franklin Gallery at the Center for International and Global Studies, and the David M. Rubenstein Rare Book & Manuscript Library. Viewers follow paths that create a variety of perspectives on those who live intrepidly in exile in and around Europe. 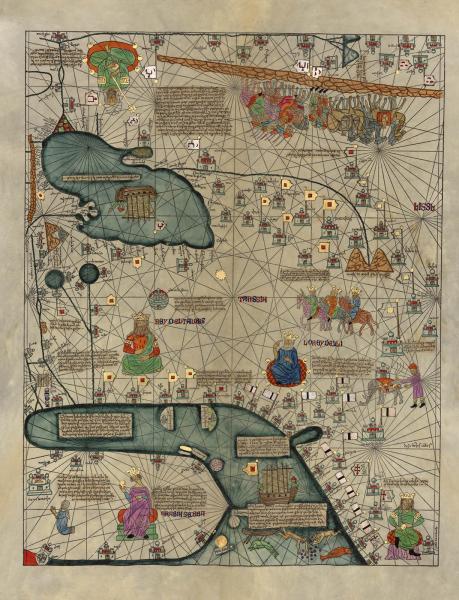