Trieste-Zurich-Paris 1914-1921 is the last line of James Joyce's Ulysses, and the signature of this experimental novel, published first in France in 1922. As we mark the centenary of Ulysses, we celebrate its multi-lingual play.

The small pop-up exhibit in the Perkins Circulation area invites you to discover some of Joyce's works in the collections of the David M. Rubenstein Rare Book and Manuscript Library.

This second printing, in Dijon with Maurice Darantiere, followed the first, orchestrated by American publisher-activist Sylvia Beach at Shakespeare & Company, in Paris, February 1922.

Translating Ulysses in French was a collaborative venture of Breton, French and British writers with the author. This was the first, followed by dozens of literary translations – Spanish, Irish, Italian, Arabic, Chinese – among others.

On February 8: an opportunity to learn more about the pop-up exhibit with colleagues from the Rubenstein Rare Books and Manuscripts Library, the Departments of Romance Studies, English and Theater Studies. The event is planned in person for those with Duke card access. Come enjoy something of the sounds of Ulysses' inventiveness in English, français, italiano, + a song and maps too.

(It's never too late to celebrate a birthday…) 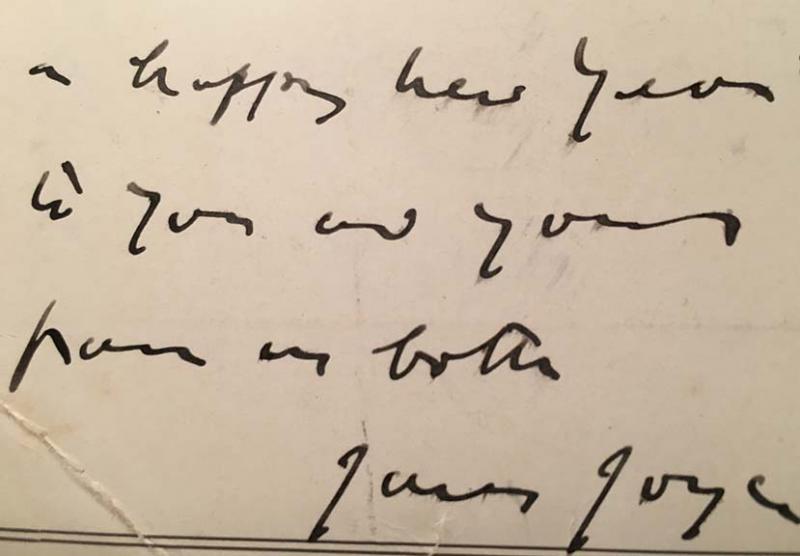 "A happy New Year to you and Yours from us both." James Joyce. From the Solterer-Curran Collection