The start of The Bikinian Anthem, which translates “no longer can I stay; it’s true,” is the title photographer Lawrence Sumulong chose to give his multi-year project documenting the Bikini diaspora in Springdale, Arkansas. Sumulong was awarded a 2021-2022 Collection Award by the Archive of Documentary Arts and will be featured in an exhibit of the same title at the David M. Rubenstein Rare Book & Manuscript Library.

The Bikini Atoll was the location for 23 nuclear tests by the United States. Starting with Operation Crossroads in 1946, the people of the Bikini Atoll were relocated to neighboring islands, facing near starvation and an uprooting of their way of life. While testing ended in 1958, the Atoll remains uninhabitable, and the Bikini community continues to live spread out across the Marshall Islands and the United States.

Sumulong writes in his project statement, “The relatively recent emigration to the United States entails yet another significant move away from their ancestral homeland.”

In this exhibit, the long-term environmental impact on the Bikini community is depicted through photographs and text. Intimate portraits share space with images of daily life in Springdale; examining ways in which community is reformed, maintained, and changed. Supporting material from other archives offers a first-hand account of the preparation and execution of Operation Crossroads.

Of significant note is the choice of banana fiber paper as a photographic base. Sumulong, who is Filipino American, explains, “I wanted to learn from an adjacent and related ethnic experience, to foster empathy across cultures, and understand who we are as Americans in this new administration and era.” By printing on banana fiber paper, Sumulong visually and conceptually connects his own heritage with the Marshallese experience by way of a crop endemic to both places.

About the photographer:
Lawrence Sumulong is a commercial and documentary photographer based in Brooklyn, NY. His personal work looks for ever-shifting approaches to documentary storytelling and reflects how particular historical moments alter, disrupt, and shape one’s society and sense of self. Most recently, he has been documenting emerging Asian American and Pacific Islander communities. 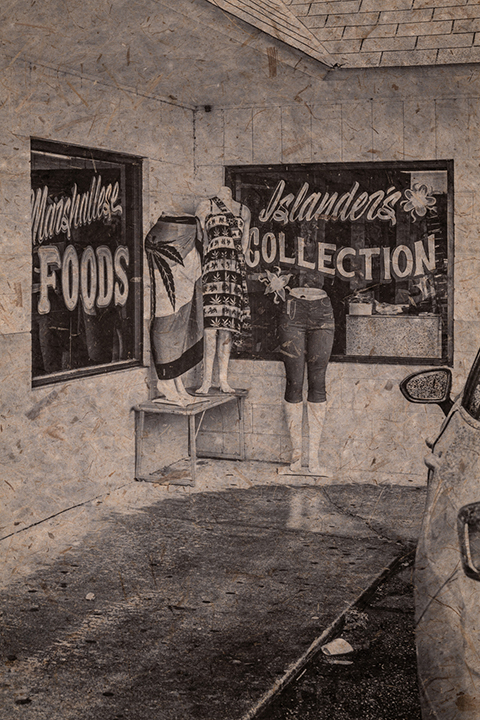 A Marshallese-owned business in Springdale, Arkansas. Photograph by Lawrence Sumulong