On display in the Michael and Karen Stone Family Gallery are items from the Rubenstein Library used in instruction sessions with Duke University undergraduate students.

Since 2001, students in the Digital Durham seminar have studied Durham’s cultural, economic and political history through census data, maps, photographs, business ledgers, ephemera and correspondence. On exhibit is The Orange County Tax List of 1875, a unique document that provides insight into the history of local taxation. It offers students a window into land and personal property ownership in the township of Durham, ten years after the Civil War. This item is available online https://archive.org/details/orangecountytaxlist1875_201708/page/n117/mode/2up

COURSE:  Art and Activism: Manifestos, Revolutions, and the Avant-gardes

This seminar deals with the history of the manifesto genre and its connections to the revolutionary literature of the avant-garde. Futurism, Dada, Surrealism, and the Situationist International are perhaps the most famous avant-garde groups to publish revolutionary manifestos, but the genre of the manifesto is also important for movements of anti-fascism, feminism, anti-racism/Black power, accelerationism, and environmentalism. After reading through a selection of manifestos on these topics, students write their own manifestos at the end of the semester, and some are on display, along with materials viewed by the students.

In the Rubenstein library class session we wanted to give the students a sense of the materiality of some of the manifestos they read in class—how people at the time would have experienced them not only as ideas but as objects.  Also, students could see how political ideologies such as anarchism and fascism manifested themselves in culture and how ideas informed and influenced later generations of thinkers and activists.  Finally, we wanted to include some reactionary conservative treatises as a testament to the social, political, and cultural influence of movements dedicated to empowering the marginalized and eradicating inequality.

New collections from student groups Pureun, which performs K-pop dance routines, and Duke Chinese Dance are entirely born-digital: they include mp4s, JPGs, Word documents, and more—and not a single piece of paper. Students in Dr. Calvin Cheung-Miaw’s course this past semester browsed through the Pureun and DCD records on their laptops via a dedicated Box folder.

These collections mark a shift in collecting practices for the Duke University Archives, which regularly works with student groups who store all of their documentation on Google Drive or other similar cloud storage systems. Researchers can access these student group records on a dedicated computer workspace in the Rubenstein Library reading room.

COURSE: The History of the Book

This course explores the history of the “book” as physical object from its earliest forms (clay tablets, papyrus scrolls) through to texts in the digital age as well as the role of the book in different cultures, and in intellectual history. The class includes extensive hands-on experience with, and study of materials in the Rubenstein Rare Book and Manuscript Library. The items on display were shown during a session focused on women printers, publishers, and readers.  The New-England Courant and A discourse occasioned by the death of the Reverend Mr. Nathaniel Clap... are items that highlight the work of Ann Smith Franklin, (sister-in-law of Benjamin Franklin) who was a printer in eighteenth century America.

This course considers the case study of the US romance fiction industry and its global reach. The romance novel is the most popular form of fiction in the world. Its industry is powered by women, produces a product consumed by women, and exports to global audiences. The class explores its history, role in popular American culture, and rise to dominate the fiction market. The session in the Rubenstein Library considered how notions of gender and sexuality have shaped the marketing of romance fiction from its origins as well as representations of gender and race in romance fiction. On display are two books by Selena Montgomery, the nom de plume of Stacey Abrams. After serving for eleven years in the Georgia House of Representatives, she became the first Black woman gubernatorial nominee for a major party in the United States, and was the first Black woman and first Georgian to deliver a Response to the State of the Union. As Selena Montgomery, Abrams is an award-winning author of eight romantic suspense novels. 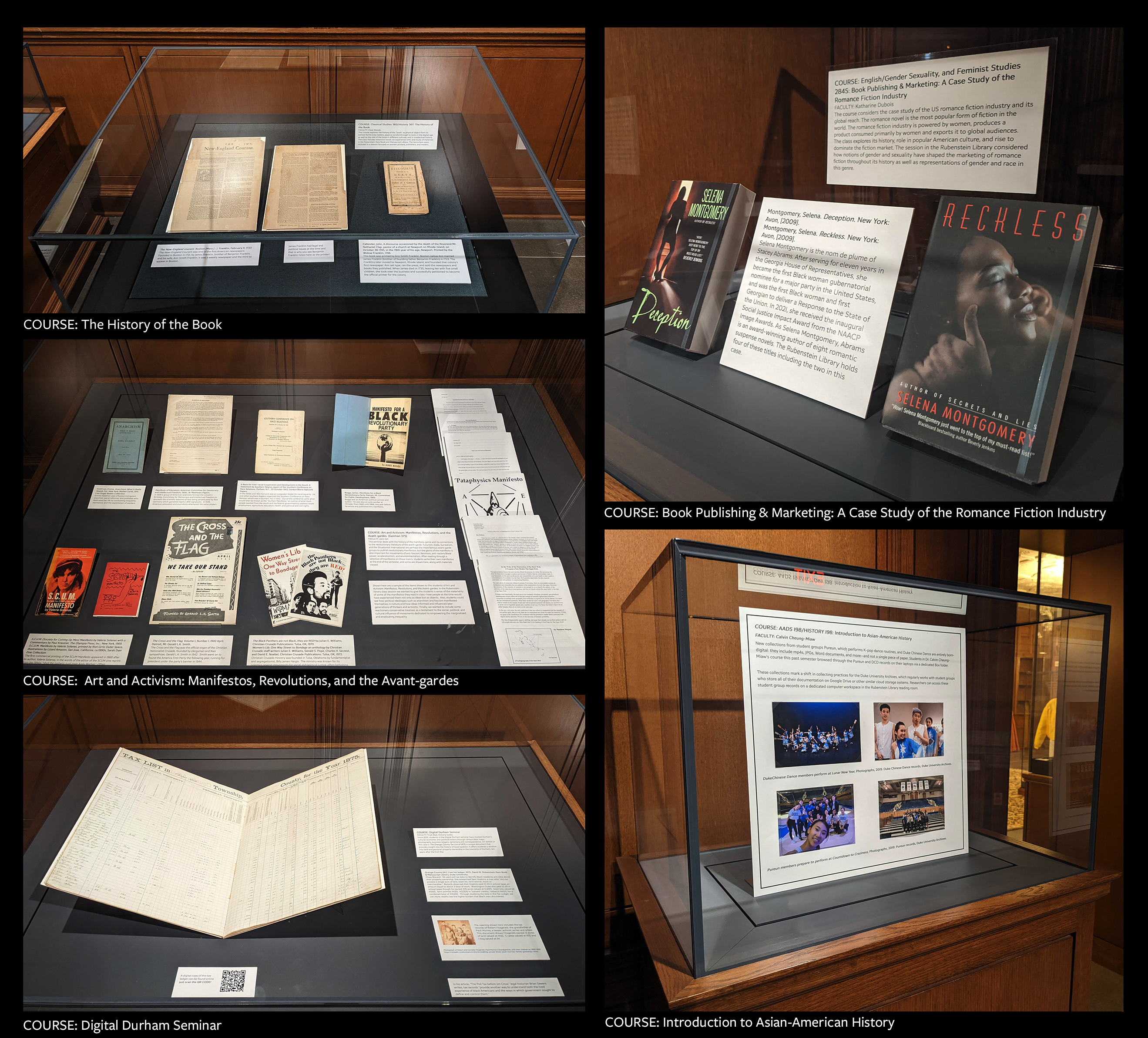 (Left) The History of the Book; Art and Activism: Manifestos, Revolutions, and the Avant-gardes; Digital Durham Seminar (Right) Book Publishing & Marketing: A Case Study of the Romance Fiction Industry; Introduction to Asian-American History