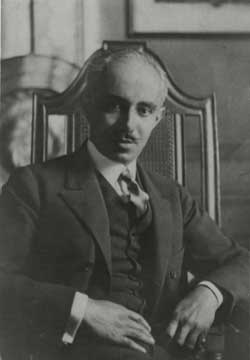 Following the establishment of the Duke Endowment, small Trinity College transformed into Duke University. Building on the existing campus (today’s East Campus) and creating an entirely new campus was a massive undertaking. The Horace Trumbauer firm was tapped to do the work, and Julian Francis Abele, Trumbauer’s Chief Designer and a Black architect, took a leading role in envisioning today’s Duke University.

In 1906, Abele began working as an assistant to the chief designer of the architecture firm of Horace Trumbauer, and in 1909 Abele became the chief designer. Around that time, he designed a home for James Buchanan Duke in New York City. Duke was impressed with the Trumbauer firm's work, and tapped the firm to begin planning while the school was still Trinity College.

On East Campus, Abele redesigned the campus in a Georgian architectural style, with a wide central quadrangle topped by a domed auditorium, now known as Baldwin Auditorium. Some existing buildings were torn down, and dormitories, a library, a student union, and classroom buildings went up. Abele also designed the Gothic style buildings on West Campus, including the Chapel, the library, the football stadium, the gymnasium, the medical school, the hospital, and the school of religion (now the Divinity School), among many others. He largely oversaw the work from Philadelphia over the more than two decades he was involved with Duke's campus; although it is generally accepted that he did not travel to Durham or the segregated South, some evidence exists to suggest he may have visited the campus at one point. He led the firm with William O. Frank following Trumbauer’s death in 1938. Abele continued to work with Duke University until his own death in 1950. Among his later works were a library addition, Duke (Cameron) Indoor Stadium, and the Allen Building, which was incomplete at the time of his death.

Although evidence for Abele's involvement in the design and construction of Duke's West Campus existed in the University Archives, including correspondence with University administrators, his name was not generally known or associated with the design for many years. During the time Abele worked on the design and construction of the campus, Duke University did not admit Black students and had no Black faculty, and Jim Crow laws severely limited the rights and activities of African Americans in the South; if he did visit the campus during that time, he would not have been welcome in many places.

Abele’s design work did not become widely known in the Duke community until 1986. That year, students protesting Duke's investment in companies that did business with South Africa under apartheid built shanties in front of the Chapel. A student wrote to the Duke Chronicle to complain that the ugliness of the shanties "violates our rights as students to a beautiful campus." Susan Cook, a Duke student and Abele's great grand-niece, wrote that her great grand-uncle, as an African American and the designer of the campus, would not have objected to the shanties as he was himself "a victim of apartheid" in his own country. This letter finally brought the architect's name to the attention of the student body and others, and in the years that followed his contribution has been recognized and honored in a variety of ways.

In 1987 the Black Graduate and Professional Student Association began the Julian Abele Awards and Recognition Banquet and unveiled a commissioned portrait of the architect. This portrait was hung in the foyer of the Allen Building, the first of a Black person at Duke. This portrait now hangs in the Gothic Reading Room of the David M. Rubenstein Rare Book and Manuscript Library, a building Abele designed. In 2016, the main quadrangle on Duke’s West Campus was renamed Abele Quad in his honor. Annually, Abele Awards are given to Black community members and supporters who make significant achievements and contributions.

While discussing his work, Abele proclaimed, "The lines are all Mr. Trumbauer’s, but the shadows are all mine." His statement alluded to the fact that as a Black man he lived in professional shadows, and due to racism he was not openly acknowledged for his architectural talent. It was not until 1942 that Julian Abele was admitted as a member of the American Institute of Architects. He died in 1950 at the age of 68, of a heart attack.