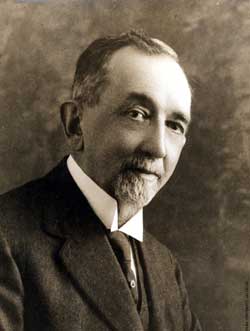 Benjamin Newton Duke, tobacco and textile entrepreneur and philanthropist, was the primary benefactor of Trinity College after it relocated to Durham in 1892. He also was the principal link between the Duke family and the college and university until his death in 1929. While his father and brother received extensive publicity for vital, substantial donations, "Mr. Ben," as he was affectionately known, quietly supported the growing institution in innumerable ways.

His support was so reliable and crucial that administrators acknowledged that, without his generosity, Duke never could have become a major university. President William P. Few always emphasized that the university was built around a strong undergraduate college. "Mr. Ben's" benefactions built Trinity College. He not only contributed money for construction and endowment but he also donated funds for equipment, salaries, remodeling, landscaping, and simply for current expenses.

For all of Ben Duke's support, the most modest and retiring of the Duke brothers long had only a single sign identifying his gifts on campus. The stone column to the right at the main entrance to East Campus has a plaque dated July 12, 1915, acknowledging that the granite wall circling the campus is a gift of B. N. Duke. To the average visitor, Benjamin N. Duke remained unknown since he had no public statue dominating the campus like that of his father on East or his brother on West

Unfortunately, an accurate tally of Ben Duke's philanthropy to the college and university is impossible. The most complete accounting discovered to date is in an unlikely source, the published Bulletin of Trinity College, which happened to list annual contributions as part of an historical section. However, this listing lacks consistency and overlooks behind-the-scenes donations. Nevertheless, it is revealing. At various times, Ben Duke is credited with donations totaling $182,000 to the general fund, $156,500 to current expenses, and $443,696 to endowment. Specific dollar amounts adding up to $438,500 are identified for a gymnasium, Alspaugh and Southgate dormitories, athletic fields, new buildings, grading and improvements to the campus, and scientific apparatus. For three years beginning in 1893, he donated $50 per year for tuition for sixty students from North Carolina. This $9,000 total in scholarships was critical in attracting students to the school, then at a new location and at a time of national economic depression. Such aid may be seen as a precursor to the scholarship and loan fund set up in 1925 in memory of his son, Angier B. Duke.

No dollar figures are given but "Mr. Ben" is credited with donating the following buildings and improvements: Asbury and Lanier in 1898; Branson in 1899; Bivins in 1905; West Duke and East Duke in 1911 and 1912; the erection of the granite wall in 1915; and the remodeling of Crowell. He also purchased thirty-eight and one-half acres of additional land, gave a large six-plate electrostatic machine, and periodically donated books to the library.

The listing in the Bulletin contains $1,234,696 in identifiable donations to Trinity College by Ben Duke without including his annual contributions toward faculty support or the Law School or his help in the construction of six new buildings. Ben Duke's contributions to Trinity College simply cannot be calculated. In fact, perhaps his most far-reaching assistance is not even mentioned except in private correspondence.  In 1896, Edwin Mims, the only professor of English, took a year's leave of absence. His temporary replacement was a young Harvard-educated professor named William P. Few. Few was so well-liked that, when Mims returned, President John C. Kilgo asked Ben Duke to pick up Few's salary so he could continue at Trinity. Few in turn became the first Dean of the College and Kilgo's successor as president.

During his thirty-year tenure as president from 1910 to 1940, Few persuaded James B. Duke to assume the family's philanthropic role toward the college. This Duke did in a spectacular way, endowing a university to be named, at Few's insistence, "Duke University." According to James B. Duke, the university is named in large measure in honor of his father, Washington Duke, and his brother, Benjamin Newton Duke.

After the announcement of the Duke Endowment in 1924 and James B. Duke's premature death in 1925, Ben Duke was besieged with requests for money. Though confined to his home in New York due to illness, he continued his quiet philanthropy. Between 1926 and 1929, he donated approximately $3,000,000 to twenty-seven different southern institutions of higher education. One may frequently discover a building named for B. N. Duke on a private college campus, such as nearby Elon College or at Lincoln Memorial University at Harrowgate, Tennessee.