Duke University's modern library traces its roots to the libraries maintained by the campus literary societies. The Columbian Society, founded in 1846, and the Hesperian Society, founded in 1851, competed for members and in acquiring books for their collections. According to the Trinity College Catalogue, each society held 2,200 volumes by 1860, while the school itself held only 650. By 1876, the four campus library collections — Columbian, Hesperian, Theological and College — totaled more than 10,000 volumes. In 1887, new Trinity College president John Franklin Crowell persuaded the two campus literacy societies to merge their collections with that of the college, creating the Trinity College Library.

After Trinity moved to Durham in 1892, the library occupied a large single room in the Washington Duke Building, the main building of the campus. One student from each of the two literary societies served as librarians. In 1900, James B. Duke donated funds for a library building. Ground was broken in 1901, and the building was completed in December 1902. The formal opening took place the following February. During construction, Duke donated an additional $10,000 for the purchase of books. 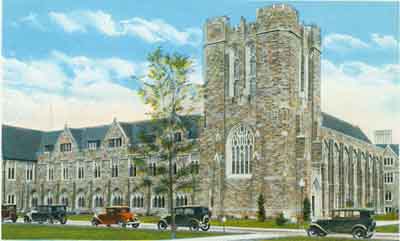 After the creation of the Duke Endowment in December 1924, a new building was constructed 75 yards northwest of the old library to serve as the institution's library during the transformation of Trinity College into Duke University. More than 100,000 books were moved to the new library after its completion in 1927.

Upon the opening of West Campus in 1930, the university's books were moved from the library on East campus to the new General Library as well as to the newly established libraries for Biology, Chemistry, Divinity, Forestry, Law and Medicine. The East Campus library became the Woman's College Library. A new collection of 4,000 books had been purchased specifically for the Woman's College, although many women students complained that the collection was inadequate and traveled to West Campus to use the General Library. When the Woman's College merged with Trinity College in 1972, the library became the East Campus Library. In 1990, it was renamed Lilly Library in recognition of a generous gift from Miss Ruth Lilly.

In 1949, the General Library on West Campus doubled its size through a contribution of Mrs. Mary Duke Biddle, daughter of Benjamin Newton Duke. The expansion included a new stack area, entry and the Treasure Room, now known as the Rare Book Room. Even with this expansion, the library quickly grew past its capacity due to its expanding acquisitions program.

A second expansion project was undertaken in 1966, and the General Library was named for William R. Perkins, a trustee of the Duke Endowment and friend and legal counsel to James B. Duke. When the project was completed in 1970, the newly enlarged Perkins Library had the capacity for 2.5 million volumes.
By the late 1990s, it was clear that the library needed to expand again. In August 2000, the Perkins Library Renovation Committee began thinking creatively about the nature of library services and making recommendations regarding the design and function of Perkins Library. A new addition named after Duke graduates Roy and Merilee Bostock and their three children opened on October 12, 2005. The Bostock Library housed most of the library's services while the 1960s Perkins addition was renovated to house the newly created Information Commons.