Mary, Theresa, and Persis Giles, were born in Jones County, North Carolina. After the deaths of their brother in the civil war, and their father soon after, the sisters’ mother moved the family to Randolph County to enroll their surviving brother in Trinity College. The sisters began working as local school teachers, and desiring to receive the same education their brother was the beneficiary of at Trinity, applied for enrollment. Though initially rejected, the sisters began studying under Professor Lemuel Johnson in private tutoring sessions, and moved through all the Trinity College coursework, taking private lessons from each of the professors. In 1878, they attended Braxton Craven’s full lecture class on metaphysics, and in the spring of that year, were conferred bachelor’s degrees by the Board of Trustees, and took full part in the college’s commencement exercises. In 1885, Trinity conferred the degree of Master of Arts upon the three Giles sisters, making them the first women recipients of both undergraduate and graduate degrees from Trinity. The three sisters went on to establish a women’s college in South Carolina, and taught until their retirements.

Completed in 1928, the building was originally known as Dormitory No. 1 until 1930, when it was named after the Giles sisters. Alspaugh, Bassett, Brown, Giles, and Pegram dormitories were all built in a two year period between the fall of 1926 and the fall of 1928, and are all minor variations on the same design. 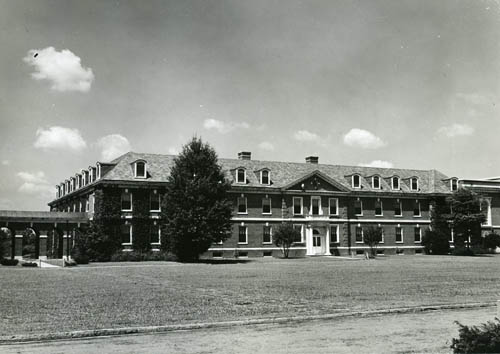