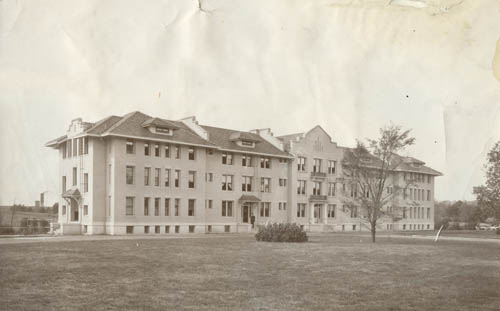 Thomas Jordan Jarvis (1836-1915) was a North Carolina politician. When Zebulon B. Vance, the governor, won a seat in the United States Senate, Jarvis became Governor of North Carolina in 1879, and served until 1885. Upon completion of his term as governor, Jarvis was appointed ambassador to Brazil. In 1894, when Zebulon Vance died in office, Jarvis was appointed a US Senator and served until 1896. Jarvis was a longtime Trinity College trustee, and was very active in the Methodist Church.

Completed in the fall of 1912, West Residence Hall opened for students to move in at the same time as Epworth closed its doors and was declared unsuitable for habitation. West is similar to East Residence Hall: a three-story dormitory of white pressed brick and Indiana sandstone, roofed with green tile. For several years before 1928 the college post office was located in the basement. The building initially served as a men's dorm until the opening of West Campus and the creation of the Woman’s College in 1930. The interior received remodeling work in 1937 and 1938 and has remained mostly unchanged since its construction.