Mary W. Lyon Stagg, daughter of Mary Duke Lyon and granddaughter of Washington Duke, gave the funds to build a pavilion to Trinity College on October 3rd, 1901. Erected in 1902, the pavilion was octagonal in shape, and roofed in copper. In 1916, after the death of James E. Stagg, the Duke Board of Trustees passed a resolution of appreciation and remembrance in which it gratefully acknowledged Stagg's membership, and stated that "the Stagg Pavilion on our campus, the gift of himself and Mrs. Stagg, will remain as a constant and beautiful reminder to present and future generations of Trinity College." Many decades after, however, the name Stagg Pavilion had faded, and the structure was known to the campus community as the East Campus Gazebo. In the mid-1980s, a plaque was placed to identify the structure, and the name Stagg Pavilion came once again into common usage. 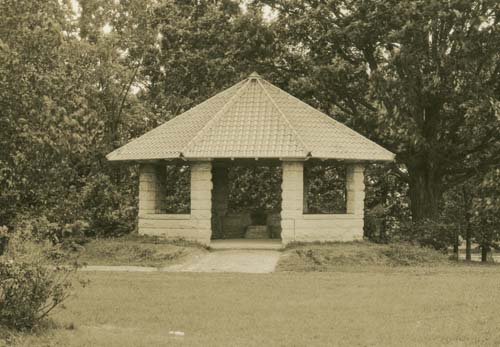