From Vesalius to the Digital Age

The year 1543 was pivotal in the history of publishing: Nicolaus Copernicus’s On the Revolution of the Celestial Spheres revolutionized the way man understood his place in the macrocosm and Andreas Vesalius’s On the Fabric of the Human Body excavated into man’s microcosm to see what makes a human being “tick.” In the medical world knowledge was no longer to be gained by studying the work of revered past physicians but by uncovering, layer after layer, the unexplored “secrets” of the human body. As the frontispiece of Vesalius’ Fabrica makes clear, the action in the anatomical theater is not on the seated reader (lector) with the open book explaining what is inside the human body (as in Johannes de Ketham’s Fasciculo de medicina, 1494), but on the anatomist (sector) himself touching the dead body with his hands and literally uncovering “God’s handiwork.” There was no turning back and the following decades provided a stunning series of discoveries that paved the way for the medical advances and laboratory breakthroughs that followed in physiology, cell biology, biochemistry, epidemiology, immunology, and genetics. This exhibit celebrates the 500th anniversary of Vesalius’s birth and the visualization his work inspired. 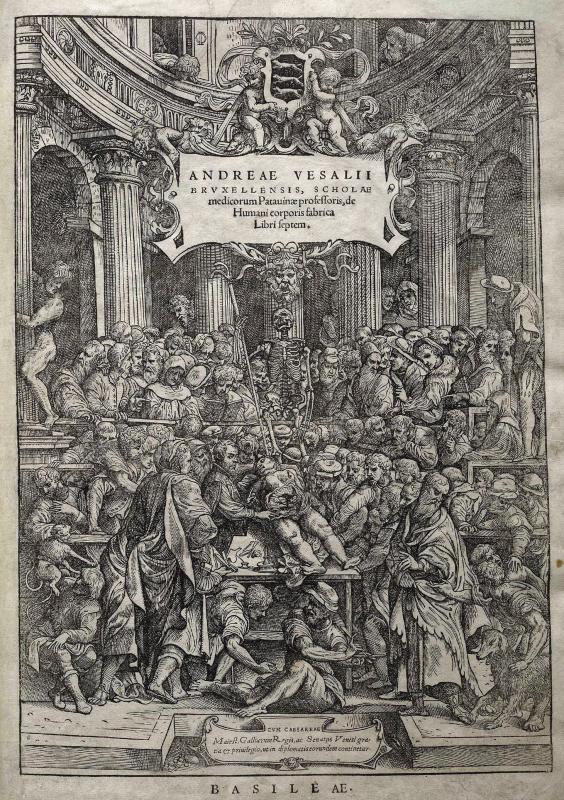