For the last seven years, Brandon Stanton has run a successful photoblog entitled Humans of New York (HONY) that attracts 7 million Instagram followers and 18 million on Facebook. HONY’s intimate window into the lives of New Yorkers breaks down stereotypes and fosters viewers’ empathy for his photographic subjects.

HONY accomplishes this feat by quoting a patently internet-age format: the image macro, otherwise known as a captioned image. Image macros are the standard format for almost every meme you’ve seen on Snapchat, Imgur, Facebook, Instagram, or via text message and e-mail forward. When these images spread virally through shares and re-posts, they become a “meme”—a term coined by Richard Dawkins in his 1976 book The Selfish Gene. Unlike HONY, however, successful memes tend to reinforce stereotypes and are satirical rather than sympathetic.

Memes, however, are not an invention of the internet. Widely available, image-based humorous stereotypes can circulate in any medium, such as paper. This exhibit explores a genre of meme that went viral in early nineteenth-century Paris: taxonomies of urban types and subcultures. Not unlike a nineteenth-century Urban Dictionary, cheeky nicknames and slang were assigned to invented social types that one might encounter on Paris’ bustling streets. These social types were humorously described in cheap, illustrated pocket-sized pamphlets or collectible leaflets.

Paris and Parisians increasingly became a source of fascination and curiosity as the city expanded and modernized. In the first half of the nineteenth century, the population of Paris more than doubled, and the laws of fashion relaxed after the fall of France’s Absolutist Monarchy following the French Revolution of 1789. The humans of Paris themselves became a source of spectacle and study. In the 1830s and 1840s, Parisians were inundated with cheap, heavily illustrated sketch writing that provided tongue-in-cheek taxonomies of Paris’ flourishing urban landscape. 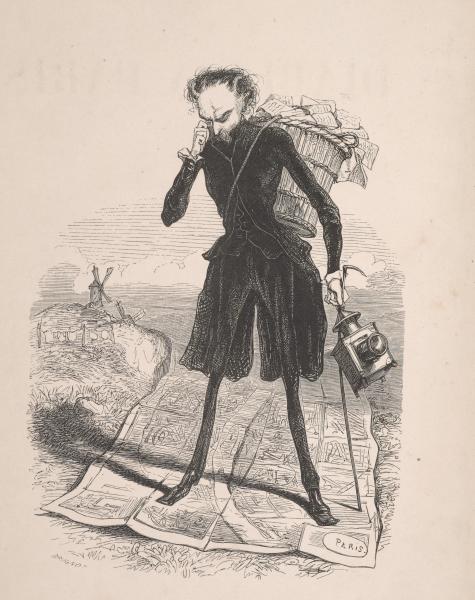