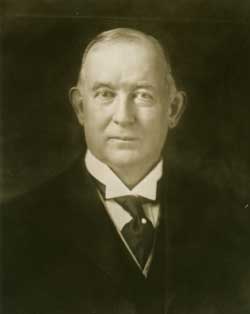 James Buchanan Duke was born near Durham, North Carolina on December 23, 1856 to Washington Duke and his second wife, Artelia Roney Duke. James B. Duke received an intermittent education in local academies. Later he briefly attended the New Garden School in Greensboro, NC (now Guilford College) and the Eastman Business College in Poughkeepsie, New York. His primary education, however, was in the family's business—first farming, then the hand manufacture and "drumming" (marketing) of tobacco products, and finally, the mass production and mass marketing of cigarettes.

At the age of twenty-eight, Buck, as he was called, opened a branch of the family's factory in New York City, which within five years was furnishing half the country's total production of cigarettes. After a "tobacco war" among the five principal manufacturers, Duke emerged as the president of the American Tobacco Company, which within a decade became a multinational corporation. Through numerous foreign and domestic combinations, Duke interests controlled the manufacture of a variety of tobacco products until the United States Supreme Court in 1911 ordered the dissolution of the tobacco trust as a combination in restraint of trade.

Duke's older brother, Benjamin Newton, had launched the family into the textile business as early as 1892. As their textile interests developed, the need for economical water power led the Dukes into the hydroelectric generating business. In 1905, they founded the Southern Power Company, now known as Duke Power, one of the companies making up Duke Energy, Inc. Within two decades, this company was supplying electricity to more than 300 cotton mills and various other factories, electric lines, and cities and towns primarily in the Piedmont region of North and South Carolina.

Lifelong Methodists, the two brothers practiced the kind of financial stewardship encouraged by their church and instilled in them by their father. Ardent Republicans and sympathetic to the downtrodden, the Dukes, individually and collectively, gave to a number of causes. In December, 1924, James B., who was by far the wealthiest member of the family, established The Duke Endowment as a permanent trust fund with designated beneficiaries. In so doing, he was following the family's long-standing patterns of philanthropy. In 1892, Washington Duke had helped a Methodist-related institution, Trinity College, relocate to Durham, and since 1887 Ben had been a member of the school's Board of Trustees. A new university built around Trinity was to be the prime beneficiary of the Duke Endowment, and at the insistence of Trinity President William Preston Few, the college was re-chartered as Duke University in honor of Washington Duke and his family.

Duke limited his philanthropy to the areas served by the power company. In addition to Duke University, he designated annual income to be distributed to non-profit hospitals and child care institutions for blacks and whites in the Carolinas, to rural Methodist churches and retired Methodist preachers in North Carolina, and to three other institutions of higher education: Furman University (Greenville, SC), Johnson C. Smith University (Charlotte, NC), and Davidson College (Davidson, NC). One of the largest foundations in the United States, the Duke Endowment, with offices in Charlotte, North Carolina, has now distributed more than one billion dollars to its beneficiaries.

After a brief marriage that ended in divorce, James B. Duke married a widow from Atlanta, Nanaline Holt Inman, in 1907. One daughter, Doris, was born to the couple. James B. Duke died in New York City on October 10, 1925, and is interred with his father and brother in the Memorial Chapel on the campus of Duke University.