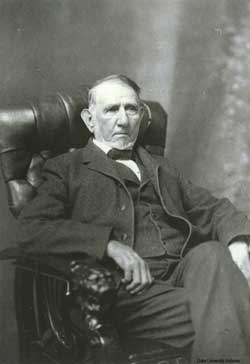 Washington Duke, industrialist and philanthropist, was born on his parents' farm, located on the Little River in what was then part of Orange County, in North Carolina. He once said that he considered himself very poor twice in his life—first, when he began making a living with nothing but "willing hands and a stout heart" and second, upon returning to his home after the Civil War. In the first instance he made a modest living farming, and in the second, he grew wealthy by turning to the manufacture of tobacco products.

With the assistance of his two sons, Benjamin Newton and James Buchanan, and his daughter, Mary Elizabeth, Washington Duke's early manufacturing business consisted of beating cured tobacco by hand with sticks, sifting it through a fine wire sieve, and packing it in small bags for sale. Selling the finished product took Duke or his boys through as many as thirty-two states, after which they would return and work the farm. The Duke Homestead, a state historic site located about four miles north of campus, is open to the public as an example of a 19th century family farm and small-scale tobacco factory. By 1880, James B. Duke turned the firm of W. Duke Sons & Co. toward the mass manufacture and mass marketing of a new product, cigarettes. After a "tobacco war" among the five principal manufacturers, James B. Duke emerged as president of the American Tobacco company, which quickly became a multinational corporation.

Thus, at the age of sixty Washington Duke retired from the business, and devoted himself to his family, his church and the Republican Party. In 1901, Duke and his sons established Durham's first hospital for African Americans, Lincoln Hospital on Proctor Street. His civic-mindedness and love of the Methodist Church coalesced in 1890 with the successful campaign to persuade the Methodist-related Trinity College to relocate to the bustling New South city of Durham. Duke's offer of $85,000 and later donations totaling $300,000 for the College's endowment began a family philanthropic pattern that was continued by his sons and daughters and their children. In 1896, he offered Trinity an endowment of $100,000 on the condition that women be admitted as residential students "placing them in the future on an equal footing" with the male students. This act attracted widespread attention. The National Suffrage Association offered Duke its vice presidency (which he declined.) Duke later withdrew the condition since he did not want to interfere in any way in the administration of the College and felt that then-President Kilgo knew where he stood.

At first quietly, but consistently by Benjamin, and later spectacularly by James B., the family's contributions strengthened Trinity College and prepared it for its dramatic growth into a university. At the urging of President William P. Few, James B. Duke in 1924 agreed to renaming the institution in honor of his father.

In the mid-1880s, Washington Duke built an impressive Victorian style mansion near the factory of W. Duke and Sons on Durham's Main Street. Known as "Fairview," the house was surrounded by handsome grounds which included an impressive glass greenhouse. Duke's deceased wife's maiden sister, Miss Ann Roney, was housekeeper, and, after the death of his daughter, Mary Duke Lyon, in 1893, her children resided at Fairview. Washington Duke died in 1905, and his statue, at the entrance of Duke's East Campus, was dedicated in 1908. After the completion of Duke University's Chapel in 1932, Washington Duke was interred in its Memorial Chapel along with his sons, Benjamin and James.